It was a beautiful but cold fall day when ceremonies and remembrances took place honoring those who gave their lives in the Vietnam War.  On Veterans Day 2011 in Washington, DC. dignitaries were on hand as well as veterans and family and friends of the fallen.   The most moving part is seeing the tributes and flowers being left at the wall and seeing people reacting to the names.  Many bring paper to trace the names.

One name that stands out for me is a childhood friend Curvin Clayton of Durham, NC who died at age 20 in Vietnam.  He was known as Cup and I often think about what life for him would be had he lived a full life.  Each person present has a story to remember about someone on that wall.

The brilliant sun caused beautiful reflections on the wall as though it was blending people present and the fallen together once again.

Tremendous gratitude to those who served and gave the supreme sacrifice. 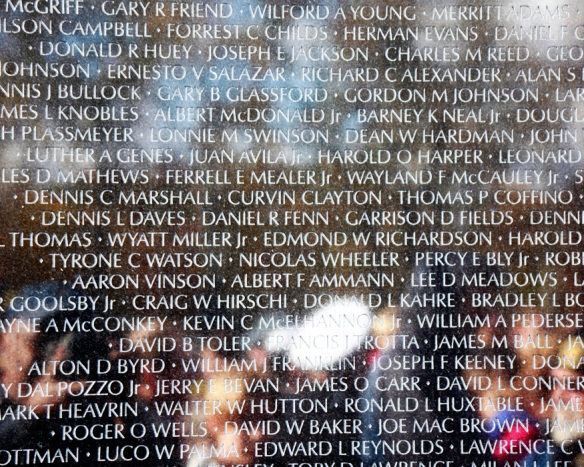 Some of the names on the Wall including Curvin Clayton

2 thoughts on “Vietnam Veteran Memorial Wall – Remembering those who served.”